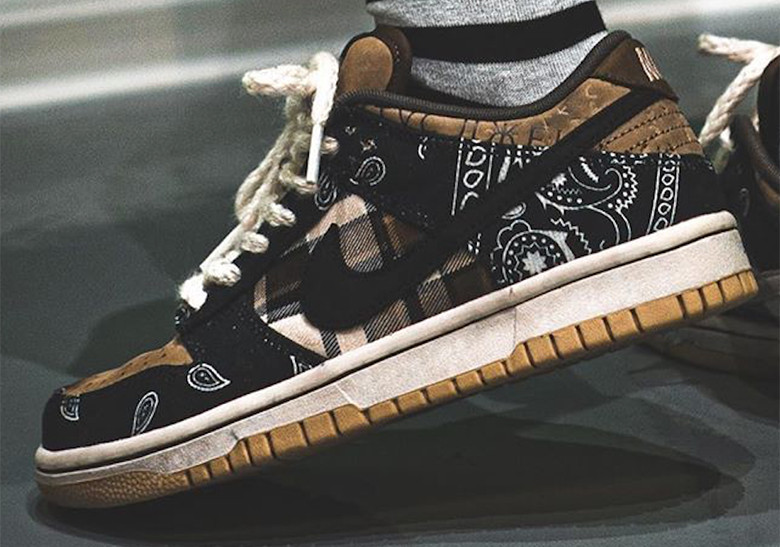 After appearing as a part of the JACKBOYS crew in their eponymous music video, Travis Scott‘s Nike SB Dunk Low had seen its fair share of subsequent teases though none in full detail: that is, however, until now. Proving its release is certainly imminent — rumored to be sometime next month as of current — the pair’s best look yet brings with it close-up’s of its many details, ones that rival the chaotic presentation of La Flame’s previous Air Force 1. Uppers, whose overlays tear to reveal a striking cement print, first come out of the box in a navy paisley, sitting just adjacent to smooth leathers of light brown at the toe box and tongue as well as similarly earthy plaids along both the lateral and medial base. Swooshes, the outward set dyed neutral and the inner a soft floral pink, further play on asymmetry while frayed stitching above distresses to what seems to be the artist’s taste. Soles mark with a sun-bleached gum in complement to parts of the core palette while the edge of the fat tongue and the heel tab brandish with a militaristic olive, nearby a grey atop the lining. More subtle details by way of the “CACTUS JACK” text and the bandana-esque insole then finish, preparing a release that will likely hit Nike.com as well as select shops in February.