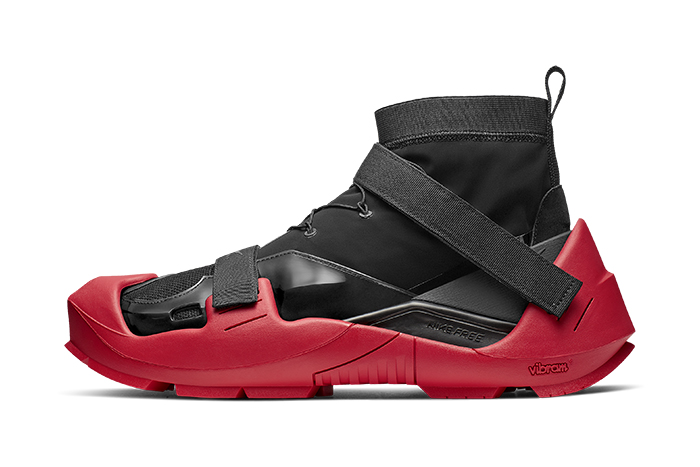 As the Swoosh explains it, ‘ALYX founder and creative director Matthew M. Williams extends the investigations in balancing technical processes with traditional craft that have characterized his collaborative efforts to date. The shoe follows themes introduced in the MMW Series 2 collection, creating conversation between interior and exterior spaces and finding opportunity for transformative elements that shape-shift depending on environment.’

The result is two different takes on the Free TR 3. While the men’s version incorporates track spike–inspired speed lacing and medial zippers for ease of entry, the women’s version comes with a slip-on upper as a nod to the Nike Elite High Quarter Sock. Both versions sport moulded overlays that allow the kicks to rock an aggressive overlaying Vibram sole unit.

‘This shoe embodies the multi-functionality of our modern urban existence,’ says Williams. ‘We are proud to have collaborated with Vibram on the detachable crampon rubber sole, which allows for the shoe to be used as a minimal trainer inside of a gym or as a resilient boot on city streets or park trails.’

Williams’ Free TR 3 SPs will get an initial launch June 8 at the NikeLab Chicago Re-Creation Center c/o Virgil Abloh ahead of a global release on June 27.