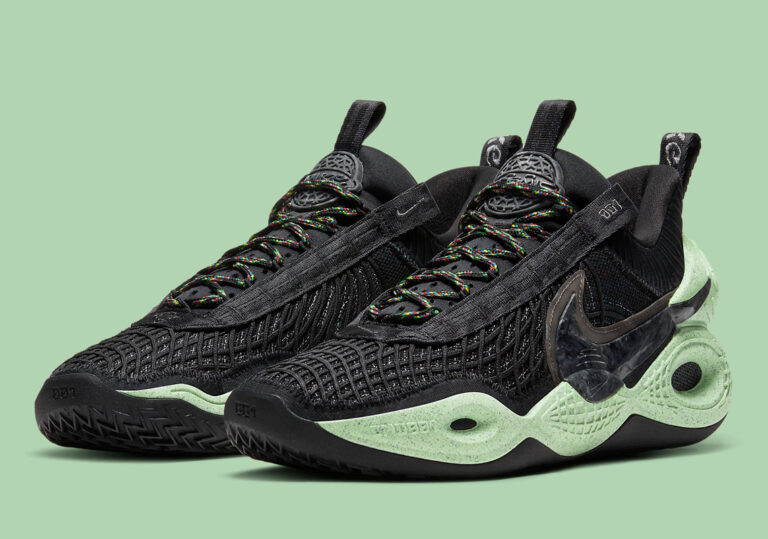 NIKE, Inc. has dominated the performance-basketball space for a few decades, and it’s recently (unofficially) previewed the next page in its never-ending story: the Nike Cosmic Unity.

First previewed by the Los Angeles Lakers’ Anthony Davis in December 2020, the silhouette took the Internet by storm with its eye-catching design. Mixed-materials make up the upper, predominantly following a net-like aesthetic from midfoot to forefoot. Heel areas forgo any webbing, but indulge in an equally eyebrow-raising, ridge-laden arrangement. Laceguards deliver their own flair through a build that extends past the most-upper functional eyelet à la Air Jordan 34.

Elsewhere, enlarged lateral side swooshes add more personality to the hoops-ready proposition, but they’re overshadowed by the bulging, spherical styling of the midsole. Cutouts across the tooling resemble those on Allen Iverson’s first signature shoe; this Cosmic Unity’s midsole boasts a “Green Glow” tone that revels in the spotlight thanks to its muted surroundings. Underfoot, a full-length Air Zoom Strobel unit – which currently exists on the KD 13 – is visible via the herringbone tread. (Cushioning is stitched directly onto the upper via this arrangement.)

An official Nike.com release date is still unknown, but this new sneaker from Nike Basketball is likely to launch before the NBA 2020-21 Playoffs commence.

Given the “Cosmic Green” colors, it could drop during All-Star Week as the color palette matches that of other All-Star Week drops such as the All-Star Dunk High and Foamposite. While you wait, enjoy images of the pair below.

Want To Buy?
Make sure to follow @buzzsnkr for live tweets during the release date.