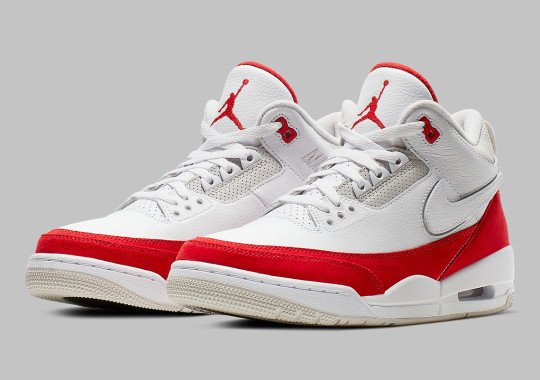 In March of 2018, Jordan Brand released the Air Jordan 3 “Tinker”, a original sample that Hatfield himself created back in 1988. Now, nearly a year removed from that original drop, the Jumpman is re-visiting the Swoosh-laden iteration with a University Red and White design that appears to come fully equipped with interchangeable logos, similar to the University of Oregon exclusive PE that made waves in November. Other key details include a full suede material in place of the elephant print, while a red lettering on the Nike Air heel logo harken back to the original “Fire Red” colorway from 1988 (and still the only original colorway that hasn’t returned with the heralded Nike Air). These are expected to release on March 30th for $200 in Quickstrike fashion.