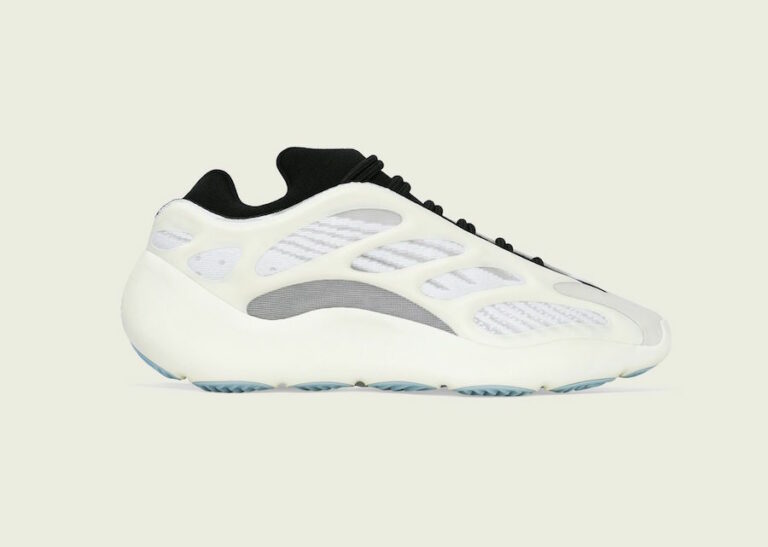 Kanye West and adidas Originals are officially set to release the adidas Yeezy Boost 700 V3 during the holiday season. Back in September, West gifted a pair to DJ Khaled, which gave us our first look at the finished pair.

The adidas Yeezy Boost 700 V3 has been completely redesigned from the V1 and V2 releases. It features an upper composed of monofilament engineered mesh with RPU overlays for structure and durability. The RPU cage has glow-in-the-dark features that provide a unique look and feel. The bootie construction provides a snug fit while the tongue features reflectivity that emits light in darkness. The PU encapsulated EVA midsole provides comfort and durability, and the herringbone rubber outsole offers unique design cues and improved traction.

UPDATE: adidas has officially confirmed that the “Azael” Yeezy 700 V3 will release exclusively in North America and Europe on December 23rd for $200 USD.

UPDATE: Detailed photos via hanzuying of the “Azael” adidas Yeezy 700 V3 that features a thick cage overlay in a glow-in-the-dark finish.

UPDATE: According to Yeezy Mafia, the latest adidas Yeezy 700 V3 will not feature Boost in the midsole, and instead will include an all-new cushioning technology. A release date is currently set for December 23rd for $200 USD.